bee monitoring technology
The word ‘beehacker’ has been entered into the lexicon of popular culture. A beehacker has been defined as:
(noun) A beekeeper who uses digital tools and technology to help monitor and manage a collection of hives.
Also: bee hacker and —beehacking.

… monitoring the bees in the transparant beehive, sept.2012

what can we monitor?
Which sensors do we need for it? And Where do we have to integrate them?
visual: webcams inside hive (infrared) or outside behind window
heath sensitive camera to spot the ‘heather bees’
sound / vibrations (contactmicrophones – piezo’s, other small microphones)
temperature inside / outside
humidity inside / outside
airpollution / Co2
moving of the bee-blob/nucleus inside of the hive (very important in winter)
number of bees flying in/out (summer)
landing of the bees on the landing strip before the flighthole (theremin? Aluminiumfoil?)
weight of the hive (growth of the colony, hive filling up with honey)

graph representing the humidity data in the beehive#3 at okno, from august 2011 to february 2012

graph representing the temperature data in the beehive#3 at okno, from august 2011 to february 2012

temperature and humidity
Brood Chamber & Environmental Monitoring. Warming up and cooling down.
Temperature and humidity inside and outside the hive are important indicators of hive health. A design for an environmental monitoring system is proposed able to log temperature and humidity inside the hive brood nest and measure temperature, humidity, and solar activity outside the hive.
Mammals shiver to generate heat. Likewise, some worker bees have a role as ‘heater bees’ [TAUT2008] that can dislocate their wings from their flight muscles and flex those large flight muscles to generate heat. These heater bees are easily identified in images taken by heat sensitive cameras because the temperature of their thorax can reach over 109 degrees! This contrasts with the normal temperature of the brood nest of 92-98 degree Fahrenheit. Even when the temperature outside is below freezing, the center of a healthy hive can be 92 degrees.
If the outside temperature falls below 54 degrees F., bees cannot fly and they will be confined to the hive. If the bees either run out of honey or it is so cold that they cannot crawl from the edge of their warm cluster to the honey (below 50 degrees F, they cannot move), they will starve or freeze.
Cooling in the hot summer is just as important. Wax softens if the hive temperature exceeds 93.2 degrees Fahrenheit. Beside structural problems, this negatively impacts vibration-based communication between bees inside the dark hive[TAUTZ2008]. In the hot summer, mammals sweat and pant to cool off. Bees collect water, spread it over the comb, encourage evaporation by mechanically creating air currents inside their hive to cool it down. In both cases, the evaporation of water into vapor provides cooling.
Research [FERR08] suggests that temperature of the hive increases immediately before a swarm occurs and drops below ambient temperature at the time of the swarm itself.
Humidity inside the hive and outside can influence how quickly the water in nectar is evaporated and transformed into honey. It may also indicate environments that favor fungal (Chalkbrood) growths that can devastate hives.
http://www.beehacker.com/wp/?page_id=84

Co2
Do not completely seal the hive off. Always leave the varroa-drawer out. The bees produce moisture and CO2 and they will suffocate if there is not sufficient air circulation and ventilation.

solar activity
The prediction of when flowers bloom (nectar flows) is more accurately estimated by counting the number of sun-days than by looking on a calendar. Solar activity also indicates how many days bees have available to forage for honey.

vibration based communication
I’m an electronics engineer doing a similar project. My motivation is on automated species detection and detecting the early signs of swarming. I find it’s easier to do sound recordings and analyse them later on a PC using Audacity or Matlab. Alternatively I’m sure you’ll find an IPhone/Android app for spectrum analysis.
If you want to build a real-time spectrum device, I would consider an arrangement of analogue filter banks, comparators and LEDs. Quite doable for an amateur.
For your information, I have found, the dominant frequency is approximately 220-240Hz followed by the first harmonic at 440 – 480Hz. According to literature this corresponds to the wing-beat frequency which varies depending on whether the bee is flying or stationary. Moreover, accordingly to unconfirmed reports, a newly hatched bee will have a higher wing-beat frequency due to incomplete forming of the wings.
Queen piping is an interesting sound; I have recordings which place in the 400Hz – 4KHz range. Sounding much like a duck.
http://www.beehacker.com/wp/?p=240#comments

hive and colony weight
The purpose is to build a low cost scale for monitoring the weight of the increasing honey over the foraging season. In the meantime we can also monitor the growth of the colony.
A nice DIY example can be found here: http://www.beehacker.com/wp/?page_id=55 : the portable hive scale.

preliminary research
city honeybees – piezo recordings with hive 03 at OKNO, Brussels – June 2011
2 piezo sensors were inserted into the hive: one in between the comb frames, and one right in front of the entrance.
The piezo’s were connected to a small mixing panel, in order to normalize the soundlevel.
In the video we can see rather well how the sound is connected to the bees’ actions. Purpose is to experiment further with piezo sensors connected to the hive, and to make a soundperformance together with the bees.
http://padma.okno.be/Ve2c67x2/00:00:00.000-00:04:37.0000 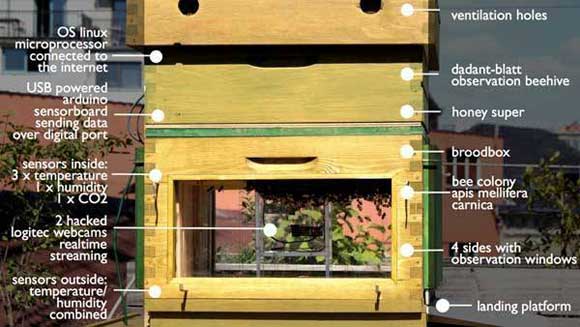 During 2 workshops in february and march 2011, we discussed a digital survey of the honeybees. Beekeepers, artists and engineers joined their knowledge to come up with a design that offers a realtime, online monitoring of the beehive.
A swarm was put into the hive on may 4th 2011. Since than 2 webcams record the colonies’ behaviour. Simultaneously the data of inside and outside temperature, humidity and Co2 level are logged.

Bee Monitoring Research in the OpenGreens
The enhanced beehive is a gateway to a honeybee colony and its environment. Numerous possibilities for observing the bees’ behavior and important measured values from within the hive are provided as well as measuring data for the climate, soil, and vegetation in the honeybee colony’s direct environment. Storing all of the data over a period of several months allows not alone a very well detailed observation but also the ability to discover and follow long-term trends of complex relations between the superorganism and its environment.
The life in and around the hive is monitored by many measurement systems.
Two webcams , equipped with infrared leds, make it possible to see in the dark. The monitor the movement of bees over the frames in the hive.
Since the hive was populated with the swarm (may 4th 2011), the 2 webcams record at 15 fps the life in the hive. Comb building, movements and action.
In the top of the frames (in the hive body) there are 3 temperature sensors capturing the temperature in the beehive, as well as a CO2 sensor and a sensors recording the humidity in the hive.
Outside of the hive, the temperature and the humidity of the direct environment are also measured. The webcams are connected to a PC board that is configured as a streaming server. It makes the images of the hive in real time available on the internet. The data from the different sensors are also logged and available in realtime.

analysis of the video data collection
Custom Software Video Analysis
Since may 4th 2011 we record at 15fps with 2 webcams, and we will continue the recordings till the start of the new bee season beginning of march.
This will give us a total of 10 months of recordings, which we will process as follows:
Videos: 160x speed-up ⇒ 24h becomes 9 minutes
1 month = 04:30 h ⇒ 10 months will be 45 hours.
Once we have processed all video material in 45 hours, we’ll run a last change-of-speed process to finish with a total of 24 hours. This means that we will finally represent the colony’s season (10 months) in the timespan of 1 day (24 hours).

A possible research of the images could include the relationship between the outside t° and the inside t° and the behaviour of the bees. With the start of the cold weather we discovered that the bees are not visible anymore on the outer comb-frame (the one closest to the camera). They go all to the inner comb-frames to form their ‘cluster’ for hibernation. Once the t° rises again, the bees spread over the different comb-frames.
Also the relation between the changing light density/frequency and the bee activity is a subject for research based on the video images.

analyse and recode the video images
analyse stills
analyse tekst, data – other input
position in the image (bees)
position in the garden (GPS OpenGreens)
enlarge the image (or part of the image) to maximum resolution and scan each pixel’s brightness
change brightness of pixels in realtime according available realtime data info
the higher the — the faster the — or other relations between realtime signals
render the invisible space of data flows, give it a structure, poetics and politics.

sonification of the data, information mapping 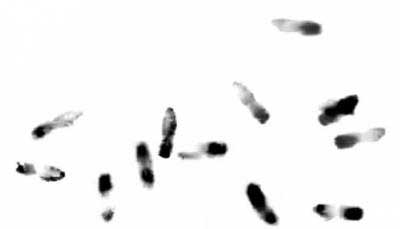 Musician Joeri Bultheel is testing the sonification of the bee colony behaviour in Supercollider. Beneath his neural networks-patch, in which the visual information from Processing determines which pattern-sequence of the four sequences stored in the connection-weights is being played. In a later stage of the project certain visual states would also be able to trigger a certain amount of noise into the connection-weights to create novel patterns based on the stored ones. The incoming visual date would determine what sequence is being played, how much it differs from the original one (by perturbation of the connection-weights through the use of noise) and also when the current changed network is skeletonized (is considered to be the actual new connection-weights-structure ). In this way an ever-changing, not-too-direct musical production mechanism controlled by the visual data of the bees can be realized. Communication between Processing (openCV) and SuperCollider is done by using OSC. 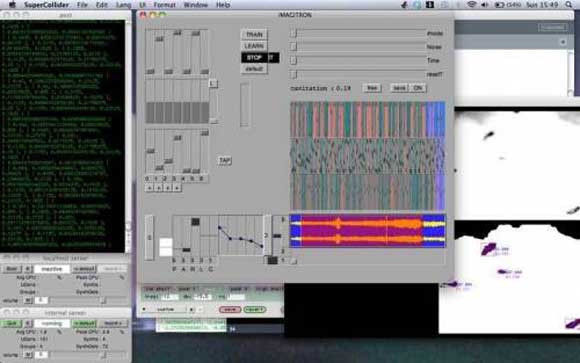 sonification of the recorded webcam-data in supercollider and processing, Joeri Bultheel

We make more tests on bees and sound.
From may 4th, 2011 till now beehive #03 at OKNO is monitored in a continuous way. Several sensors (t° inside/outside, humidy in/out and C02), but also 2 webcams at 15fps.
With the webcam movies we are doing some experiments on image/sound relation. The movielinks below are an excerpt of a concatenation of time-fragments over the bee colony season. The total movie is 4hours and 30 minutes, and documetns the building of the nest from the moment the colony was put into the hive.
Now we are trying to find a sound which represents the volatility and the lightness of the bees, a sound which respects the bees behaviour.
Joeri is trying some sonification patches in a neural networks supercollider patch, opposed to a patch that works with blob recognition an where the image/sound relation is more obvious.
http://padma.okno.be/Ve3447ya/info
http://padma.okno.be/Vh5xeh6y/info