No2Pho -from noise to voice and from voice to music- is an artistic research project investigating the behaviour of language in its many appearances: textual, sonic and visual, as well as gestural or body language. How do these disparate elements relate to each other and how do they organize within a system which includes human and computer as a sender and a receiver [and vice versa]?
As a generative sound installation No2Pho plays with a connected set of elements. It is composed of dissonant synthetic voices, changing in real time from speech to sound. The multiple voices are spatialized in a virtual environment. Its compositional parameters are defined by the physical trajectory of the listeners on the installation site. The listeners’ motion is tracked and this data is fed into a software in which the code itself creates the score. By graphically rendering this score the sounds are visualized, making the speech visible. 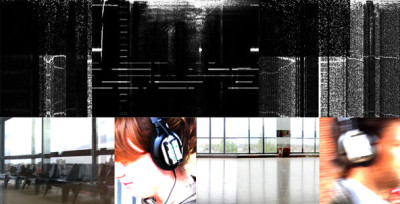 As such, No2Pho wants to create an artistic context for research about audiovisual cooperation between humans and machines. Development and realization of the artistic aspects of the project take shape through a collaboration between the researchers involved [artists, composers, programmers and interaction designers]. All phases of the project are open for discussion and reflection with the public. 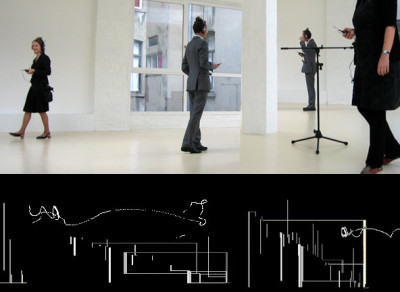 the score generated by the walker/listener is visualized in a realtime animation
keywords: voice/language/text/psychogeography/machine-aesthetics/…and non-sense

“… as I see it, poetry is not prose simply because poetry is in one way or another formalized. It is not poetry by reason of its content or ambiguity but by reason of its allowing musical elements [time, sound] to be introduced into the world of words.”
John Cage

No2Pho: visual readout of walkers in installation at CCNOA Brussels

“Text means tissue; but whereas hitherto we have always taken this tissue as a product, a ready made veil, behind which lies, more or less hidden, meaning [truth] we are now emphasizing, in the tissue, the generative idea that the text is made, is worked out in a perpetual interweaving; lost in this tissue -this texture- the subject unmakes himself, like a spider dissolving in the constructive secretions of its web.”
Roland Barthes