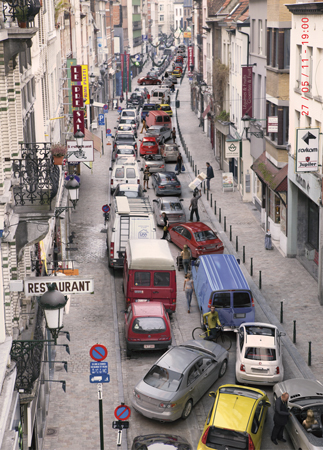 Friday 27 May 2011, 7pm, Rue de Flandre, Brussels. Car traffic has reached its critical mass. As the last automobile joins in, the roads suddenly come to a standstill. Filling up the motorways, the congestion rapidly flows over into the smallest alley: the traffic jam has ceased to be a regrettable coincidence. It has become the new condition of our public spaces. In the midst of this apocalyptic landscape, the inhabitants of the city take it upon themselves to invent a new life in symbiosis with the stagnating stream of the now useless vehicles.
more info on:
http://postcardsfromthefuture.be/2010/?post_type=postcards&p=771