Field_Notes // Ecology of the Senses is an art&science field laboratory at the Kilpisjärvi Biological Station in Lapland/Finland. Five groups work for one week in the sub-Arctic Lapland to develop, test and evaluate specific interdisciplinary approaches in relation to the notion of Ecology of Senses.

All organisms perceive and react to certain sensory data as signs, carriers of significance picked up in their own perceivable surrounding or Umwelt. This concept was introduced by Jakob von Uexküll during the early 20th century and became the foundation of the current field of biosemiotics. The semiosphere is then the sphere in which sign processes operate in the set of all interconnected Umwelten.
As hunters, herders, gatherers, artists, and scientists, we will come together to experience, explore and inventory carriers of significance in, often radically, different, subjective worlds within the larger electric and magnetic fields in which we are all ‘suspended.’ Inspired by von Uexküll who anticipated many computer science ideas, especially in the field of robotics and theories of embodied cognition, we are guided by the question how these signals interact and interfere within our sphere to enable effective communication and navigation between and among organisms and their environment.
Judith van der Elst is an anthropologist/archaeologist specialized in humanistic approaches in the geosciences. Her work focuses on understanding multimodal perception of the land, through merging embodied learning, sensing technologies, and ubiquitous computing within a biosemiotic framework.
More research on: http://urbanbeelab.okno.be/doku.php?id=fieldnotes_biosymbiotics

Surfing the Semiosphere coalesced a group into a coherent entity for sensing the local ecologies at Kilpisjärvi. As a single sensing field, the ‘I’ of this group attuned themselves to the granularity of waves formed between bacterial signals and the signs emitted through invisible technologies.

Frothing at the orifices of our I, a peristaltic gurgling foam; signals, signifiers, symbols, meaning, language are inseparable.

‘When I’m sitting on the inside bowl, and I get a huge set on the head, I expect it to happen. I enjoy that part of it too. I’m used to it not coming easy’.
(The Surfers Journal – current issue)

I live for one week, and then I am dispersed. I become dormant. I need new words for my time in the Kilpisjärvi semiosphere, the intersection of places once called the Umwelt, at the threshold between scales. Symbols emerge as moments of enlichenment.

I start at the mouth. These moments create traces and marks, like the Saana fossil, a geological surface that marks the emergence of peristaltic life measured by hundreds of millions of years of human time. This is a wave that breaks at the gurgling edge of a rivers bed, an interstitial lowway between high ground and deeper waters.

A cascade of events, the waterfall on which I stand is a torrent and swell of inorganic life, with boulders washed toward the deep waters below. I pull in the microbial sphere, bacteria, particles, spores. I feel the coolness of this new air. I take it in and let the microbes inoculate and ventilate my system. I sense a multitude of semiospheric formations

As I breathe out, that which I no longer need within this collective body becomes sign and signal in the semiosphere of other life. Here in this arctic landscape, between nose, eye and ear, membrane and frequency, signals erupt across my senses.

And I recall tensegrity, as it becomes sensegrity.

‘island of compression in an ocean of tension’.
(Buckminster Fuller)

[semiosphere] first defined by Yuri Lotman, refers to the sphere of semiosis in which sign processes operate in the set of interconnected Umwelten, whereby Umwelt refers to the concept defined by von Uexküll. Organisms experience life in terms of species-specific, spatio-termporal, ‘self-iin-world’ subjective reference frames.

[senses/sensors] A sense is a physiological capacity of organisms that provide data for perception (and meaningmaking), through sensing changes in their environment

[Surfing] the term surfing refers to the act of riding a wave, regardless of whether the wave is ridden with or without a board and regardless of the stance used.

[waves] a wave is a disturbance that transfers energy through matter or space, with little or no associated mass transport. Wave consists of oscillation of a physical medium of field, around relatively fixed locations. 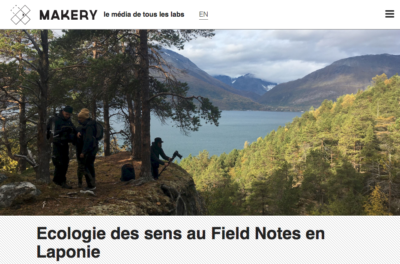 Tracing The Land, Field notes by Alice Smits is a video made as part of her participation in the Field Notes residency organized by the Bioarts Society at the Kilpisjärvi Biological Station in Lapland, Finland.