Ecovention was a term invented by Amy Lipton and Sue Spaid in 1999 to refer to an ecological art intervention in environmental degradation. The Ecovention movement in art is associated with land art, earthworks, and environmental art, and landscape architecture, but remains its own distinct category. Many ecoventions bear tendencies similar to public works projects such as sewage and waste-water treatment plants, public gardens, landfills, mines, and sustainable building projects.
Artists associated with ecovention include: Joseph Beuys, Mel Chin, Agnes Denes, Helen and Newton Harrison, Ocean Earth, Robert Smithson, Alan Sonfist, and Mierle Laderman Ukeles, among others.
The ‘Ecovention Europe’exhibition will take place in museum De Domeinen, Sittard (Nl) from Sept 3 2017 to January 7 2018. 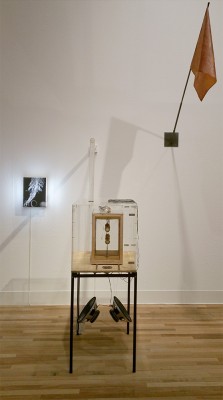 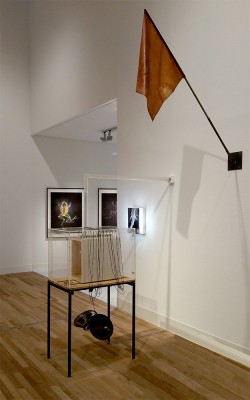 The lightbox on the left depicts a scanning electron micrograph (SEM) of an Apis Mellifera’s (most common honey bee) extended glossa, the hairy “tongue” in the bee’s mouth that collects nectar from flowers. In 2013, the colony inhabiting Maes’ “Transparent Beehive,” which had been miked to record the bees’ vibrations, movements and the build up of beeswax, suffered colony collapse disorder due to the invasion of the waxmoth. Standing empty, emitting only the recorded sounds of the honey bees that once inhabited it, this work bears witness to colony collapse disorder that poses a challenge to farmers the world around.
Maes’ “Red Flag,” a biotextile grown by microorganisms, is a warning that reflects the health status of the environment. Gruppo 9999’s rose-colored poster from 1971 implores “students and environment cultivators” to pay attention to their degraded environment.