Petcha Kucha on the research & development methods in art/science. The talk is part of BEAF (Bozar Electronic Arts Festival) and Tendencies #02 and is focussing on biotechnological processes, bacteria as living technology and problem solving in working with living organisms. 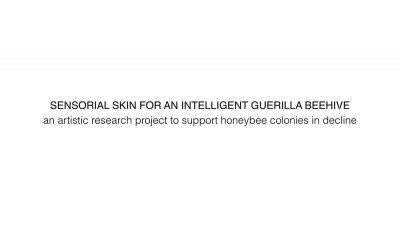 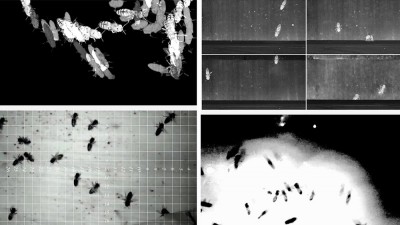 I am an artist and a beekeeper. In my Urban Bee Lab I examine the behaviour of honeybee colonies in relation to the environment.
Their daily actions are at the center of my artistic research and a source of inspiration for my artworks.
In previous projects I studied the development of a honeybee colony through its own sound. The buzz of a colony and its behaviour and conditions are quite related. 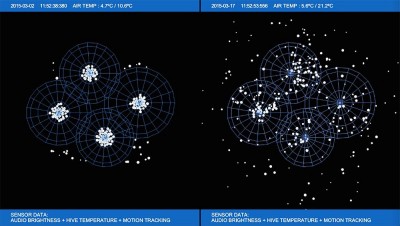 Through patterns discovered in the collected audio, video and sensor data, I analyzed the characteristics of the colony and the relationship with its environment.
The data were processed using sophisticated pattern recognition, AI technologies, and graphics software. 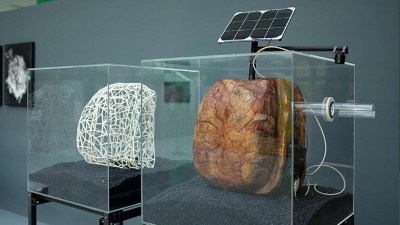 The Intelligent Guerilla Beehive is a biotech project. It is the third generation in my series of observation devices. This refuge for swarming honeybees is a mobile -double- sensing device.
It is mirroring the health status of the environment and that of the bees living inside the hive.
Colonies of color-changing bacteria, living on the outer skin of the hive, send out warnings at high environmental pollution. The inner skin is a host for colonies of pro-biotic bacteria that support a healthy bee microbiome. 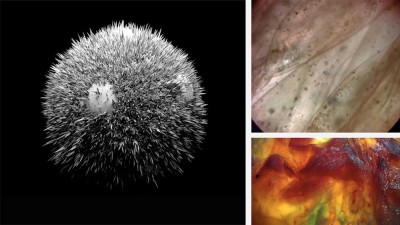 Biomimesis is used as inspiration for the development of the new hive.  Palynology -the study of pollen grains- offers a good starting point for the research. The pollen’ qualities are being examined in terms of usefulness for sensing environmental threaths. On top of their interesting adaptive and defensive qualities on micro- and nano-scale, the pollen shapes are of an extreme aesthetic beauty. 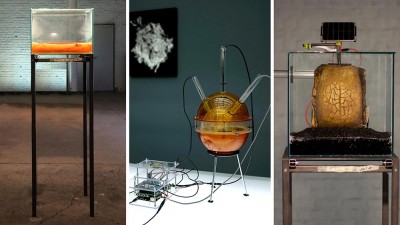 The next step in the R&D was to implement these biotechnological qualities in the primary materials that are used to build the beehive.
I decided to focus on a few organic materials that are largely available on earth: cellulose and chitosan.
I started a series of experiments to grow cellulose-based biofabrics with micro-organisms.
In collaboration with scientists I decided to augment these cellulose skins with living monitoring technology in the form of bacterial biofilms. 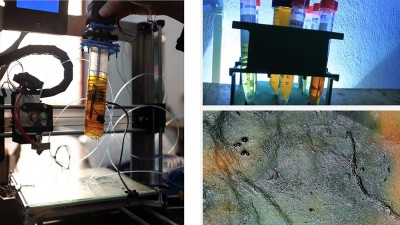 In the hacklab I implemented the bacterial biofilms on the leathery cellulose skin of the beehive.
These bacteria are designed to sense environmental pollution and they will change color when they discover a specific pollutant in the air. 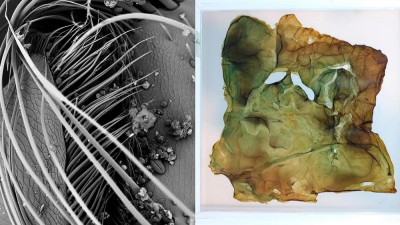 The pollution particles are transmitted by the bees themselves when they land upon the skin of the Intelligent Beehive. Fine dust sticking to the hairs on the bees’ body is passed on to the bacteria living in the biofilm on the outer skin of the hive. The bacteria are modified and they provoke a color pattern on the skin. 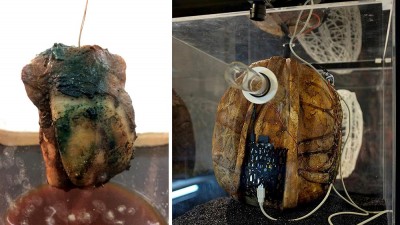 The ongoing development of these bacterial colonies on the cellulose skin forms a crust that crumbles under ever new layers of bacteria.
This makes that the Intelligent Beehive’s outer membrane becomes protected by a layer of living cells that constantly feed off the dead ones and thus cleans and repairs itself. 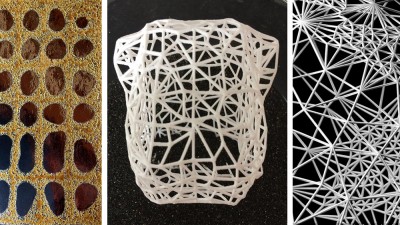 Another goal of the project was to research the possibility of 3D-printing with chitine, a component that can be found in the exoskeletons of invertebrates and thus also in dead bees. 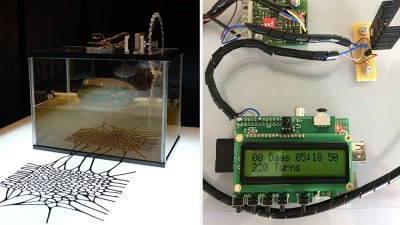 The 3D-printed skeleton would then be wrapped with cellulose skin. To do this, it is put in a container with growth medium where it turns around an axis for several weeks, till the skin is thick enough.
So far for now. Next step (spring 2018) is testing the Intelligent Beehive with a real bee colony. 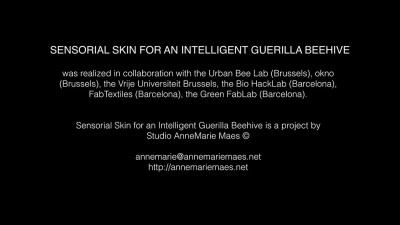