The complex bee ecosystem and its influence on others has been underlined by science, such as the threats caused by the urban pollution. “Intelligent Guerilla Beehive” is a beehive designed to allow bee colonies to survive in particularly compromised urban environments. It is a sensitive device that reacts to possible environmental pollution and contributes internally to the preservation of bee health.
In fact the skeleton reproduces the shape of a hive and it is covered by a thin skin made of organic material (cellulose and chitosan) inhabited by particular bacteria that capture the polluting particles from the pelvis of the bee body, changing colour. On the inside of the membrane there are other symbiotic bacteria, keeping the beehive microbial balanced. The genesis of this artefact is complex and meticulous. The artist and beekeeper Anne Marie Maes has been studying the behaviour of these precious insects for a long time. This is the third of a series of works focused on bees in big cities, placing them at the centre of an implicit analysis of transformations in these territories, giving them a visibility and importance forgotten outside the volatile media. This work is an urban resistance mechanism that simultaneously attacks the mechanisms of pollution and protects the development of animal life forms, with an accuracy and sensitivity that elects science to an alchemical tool for art. 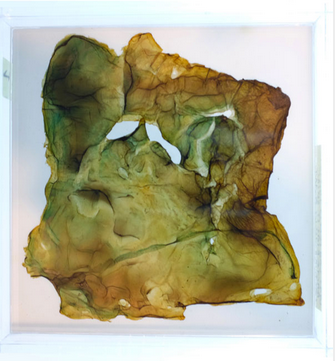 Anne Marie Maes – Introduction to the Innovation Lab on Biomaterials