Soundbees, anywhere & everywhere is an audio piece by AnneMarie Maes and Billy Bultheel.
AnneMarie Maes and Billy Bultheel started to develop the audio piece from the 8-channel field recordings made in the broodnest of the experimental Warré-beehive set-up (see drawing).
The sound-behaviour of the bee colony was recorded from june 10 2014 and the sound-experiment is still ongoing. For the Kunstradio piece, the artists started to work with the recordings from the longest day / shortest night (24 hours of the 21st of june 2014) and edited them into a 15 minutes-piece on which some processing was done with max msp, using 2 additional sound sources located at the entry of the beehive.

The beehive recordings pan over the spectrum of a day (from midnight to midnight). As a compositional principle different ideas around swarm formation were investigated.
The increase and decrease of swarm activity in the hive and its influence on its sound, became a guideline for the transformation of the recordings. Hereby using natural phenomena as musical tools and in retrospect, using musical tools as an artistic rendition or analysis for natural phenomena.
The audio work tries to embody the bee swarm while simultaneously intersecting the swarm with swirling electronic sound clusters.

The work exists both as a Stereo and as an 8 channel audio work.
The 8 channel rendition is currently on display in de exhibition The Green Light District: the place of Nature in the City of Men.
The stereo piece will be broadcasted on Kunstradio Vienna on sunday november 10th, 2014.
http://kunstradio.at/2014B/30_11_14en.html 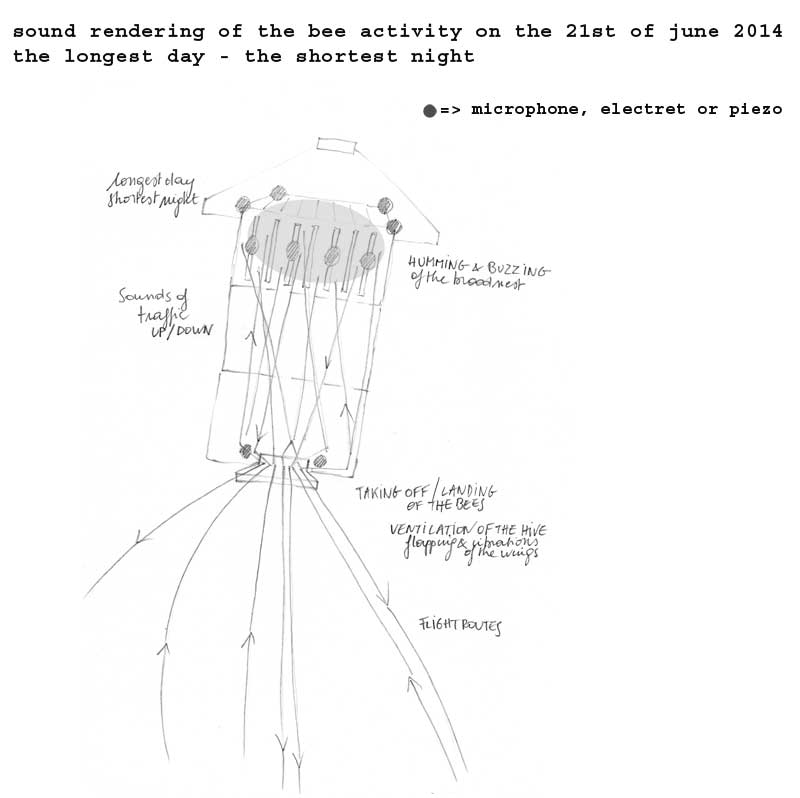 The bee activity on the longest day is tracked by 6 omnidirectional electret microphones and by 4 piezo microphones.

microphone setup for field recordings:
The electrets microphones are placed in the top cover, protected by the quilt of the Warré hive to avoid bees having access to the microphone.
The Piezo microphones are attached with thin metal wires in the frames number 1, 3 5 and 7 of the brood box. All microphones are connected to pre-amps attached to the inside of the hive’s roof. The pre-amps are powered by a battery that is located a few meters away from the hive to avoid the creation of EMF.
The settings of the microphones are controlled by a 8-channel soundcard (Presonus) and recorded by an Asus computer running on Linux, on which applications were developed to save the soundfiles and process them.

Actual Sampling Rate is 44,1 KHz. First we thought this would be overkill as the frequency spectogram of the beesounds reaches only 3500 à 4000 kHz (doubled by Nyquist theorem this would give us a standard sampling rate of 11,025 kHz) but after running tests we concluded to keep the 44,1 kHz standard as with lower standards we loose a lot of detail in the sound files. This quality is not needed for the scientific experiment, but it is important for the aesthetic presentations of the experiment.
Every :00, :15, :30 and :45 minutes of every hour a 3-minutes (180 sec) soundfile is recorded by the 8 microphones in .wav format and saved into an 8-channel wav-file. The .wav files are send from the Asus via ethernet to a NAS disc (network assisted storage) for storage. The NAS disc is located at 10m, inside the house.

Since mid-august 2014 we have been adding a realtime audio streaming set up. We have been connecting a second 8-channel audio card (Focusrite) and 2 more electret microphones were placed at the entry next to the landing platform (to record the taking off of the forager bees, and to record the ventilation processes of the guard bees). We have been splitting the channels of the 4 existing electrets (in the rooftop), as well as 2 of the existing piezo’s, and we’ve been connecting them to the new soundcard for streaming. For the new electrets mikes we’ve put 2 more pre-amps in the rooftop cover.
In total we stream 8 channels, but we can modify the setup at any time by disconnecting the channels that we don’t want to stream. The stream out of the soundcard is a USB which connects to the Raspberry from where we will send the audio+video stream.

More info on the origin of the field recordings, the set-up of the sound-beehive project, can be found here: http://urbanbeelab.okno.be/doku.php?id=sound_beehive 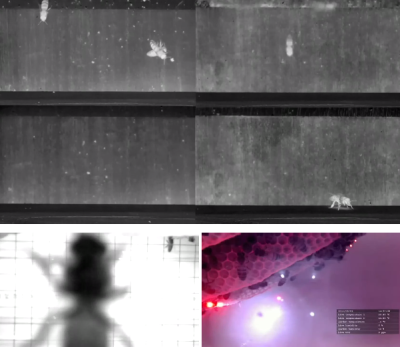 Left: Sound Beehive Bees in action on the landing platform. From the same beehive, 4 clips with twice 10-day interval, 4 identical timeframes (1pm).
Right: Bees building their nest inside the hive.