‘Close reading of the Genesis of a Microbial Skin’ gives a condensed overview of my notes (relating to the Intelligent Beehives research with a focus on SKIN) between 2012 to 2017. The project is about growing Intelligent Guerilla Beehives from scratch, with living materials – as nature does. Biomimesis is used as a starting point for incubating ecological thinking on matter and form. Different sensorial qualities of microbial and vegetal SKIN are being examined in terms of usefulness for sensing environmental threaths and for monitoring the wellbeing of the bee colonies. The Lab experiments were carried out between 2012-2017, in the Brussels Bee Laboratory, the Laboratory for Form and Matter, the Biohacklab Barcelona, the PRBB/upf Barcelona and the SEM (Scanning Electron Microscopy) lab of the University Brussels (VUB). 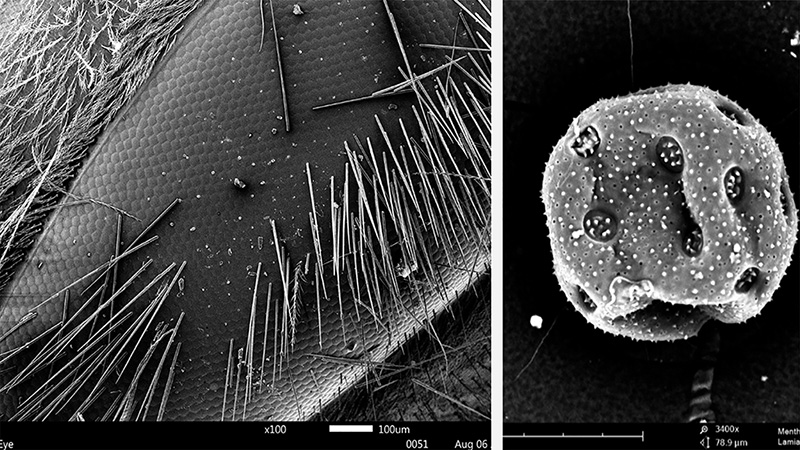 Palynology is the study of pollen grains and other spores. Determination of the pollen, brought by the bees to the hive, can help us to map the foraging areas of the bees. It can give us useful information on the environment, for a wide range of purposes.On top of this, pollen are extremely aesthetically attractive. They turned out to be a huge source of inspiration for the design of the beehive.
In August 2013, I started to work with the Scanning Electron Microscope at the Vrije Universiteit Brussels (VUB). The SEM offers the possibility to make perfect 3D images up to +20.000 enlargment scale. Ideal for studying and photographing small particles as pollen grains, and bee-parts as proboscis, receptors on the antennae, e.g. 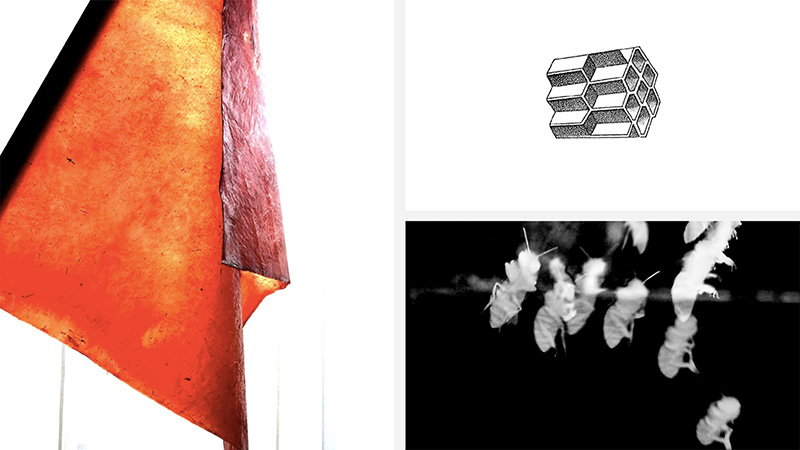 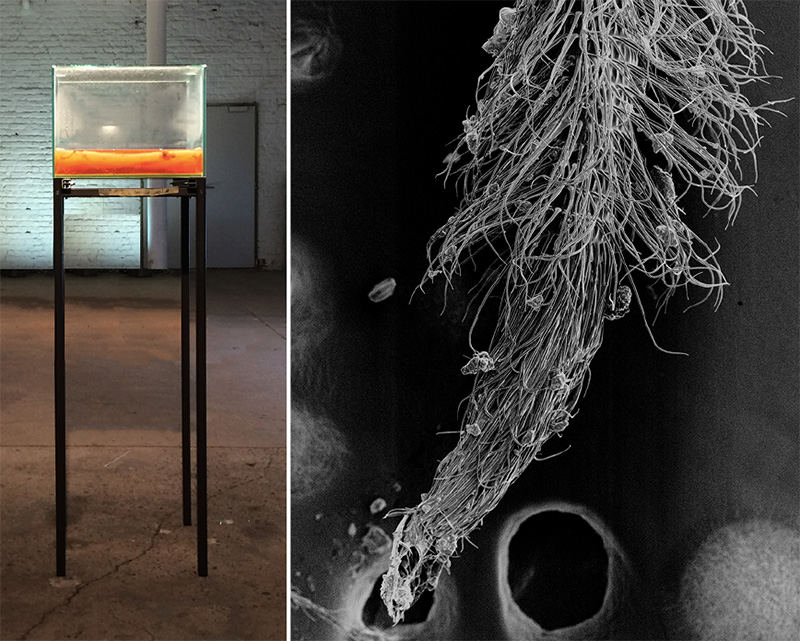 Cellulose skin growcontainer with medium, Acetobacter bacteria and yeast cells;
Scanning Electron Micrograph (SEM) of the tip of the Proboscis of an Apis Mellifera (tip of a honeybee tongue, x 150)

The project starts at experimenting with micro-organisms and organic materials to create thin membranes and surfaces grown by a symbiotic community of bacteries and yeast cells. In a second phase, this leather-like cellulose skin will be augmented with living technology. We experiment with biofilms with useful microbes for environmental sensing as well as with biofilms with antibiotical properties (to support the bees against the Varroa destructor parasite). We engineer cells as a biosensors, and implement them on the leathery cellulose skin to sense environmental pollution. We work with skin as programmable material. Specific bacteria can act as biosensors, they change color when they sense a specific pollutant. The double-layered skin behaves as a bio-digital living system, the living matter (the bacteria) becomes the monitoring technology.
Parallel to these experiments, we investigate the possibilities of adding chitine/chitosan on top of the microbial skins, to check qualities as resistance, waterproofness and strength. 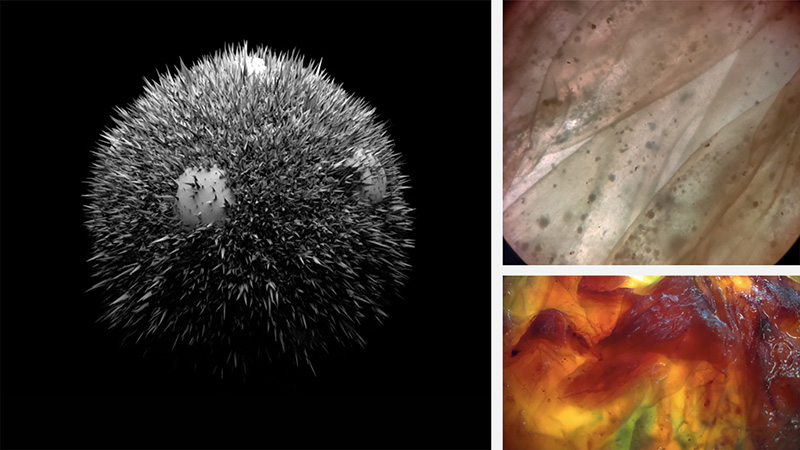 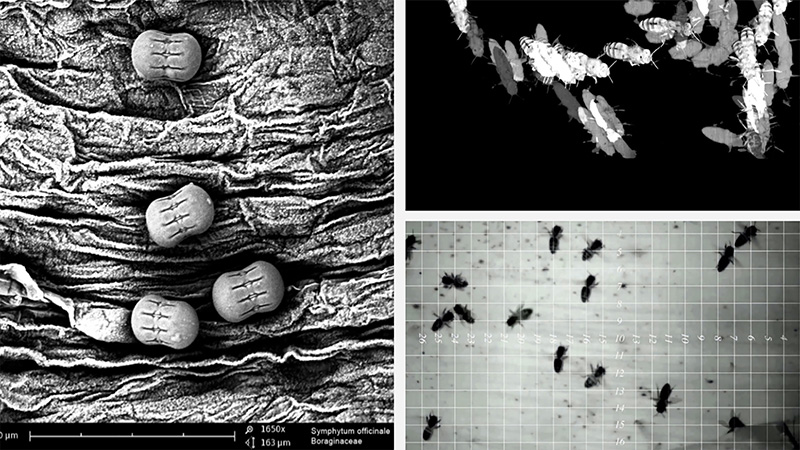 We went hunting for bacteria in the forest of Collserola, Barcelona. After collecting the microbial skins that were left next to a beehive and inside a beehive, those skins were put to growth with some LB medium and later some strikes were brought to culture in petridishes. But the bacteria that were recovered from those samples were all the same and had no color at all…
Conclusion after a few months of bacterial experiments on microbial-grown skin: only Lactobacillus plantarum was able to survive on the skin. The microscopic images have demonstrated that. Luckily the Lactobacillus not only grows, but also changes the colour clearly. 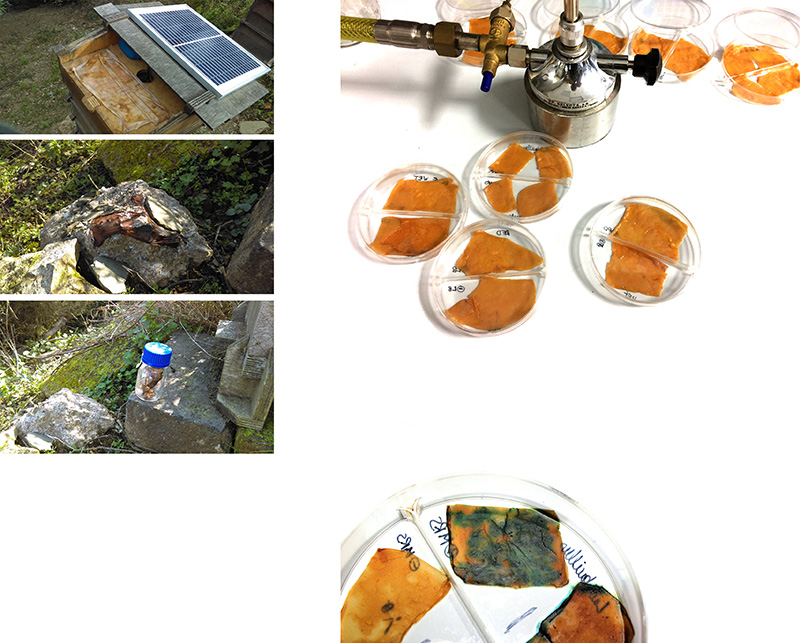 Bacteria hunt around the beehive
Bacteria cultures (Lactobacillus plantarum and Deinoccoccus radiophilus) in the lab.

A bee eye is composed of 6900 hexagon pixel lenses, with hairs to protect them. The hexagon basis of the lenses is identical to the form of a honey comb. The antennae -the bees’ instrument to scan the environment on all sensitory levels- are full of receptors – thousands of them! With these receptors, the bees sense an smell. 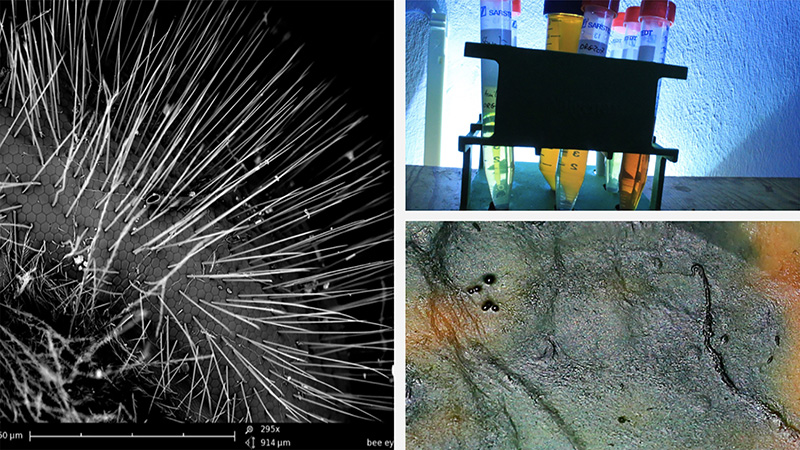 The Intelligent Beehive is enveloped by a biofilm with bacteria, as well inside as outside the shell of the hive – which is grown out of microbial cellulose. This microbial cellulose support serves as growth medium for the bacterial colonies. The outside is the place for bacteria that can sense the environmental threats – they change color under specific circumstances. The inside gives place for development to a colony of bacteria that reflects the healthy microbiome of the bees; these bacteria give the bees a ‘good feeling’ in their home, a kind of ‘wellness’, and make them at once more resistant to natural ennemies as varroa mites or other bee-pathologies. With the ongoing development of the bacterial colonies, the cellulose skin acts as a crust that crumbles under the ever new layers of bacteria. 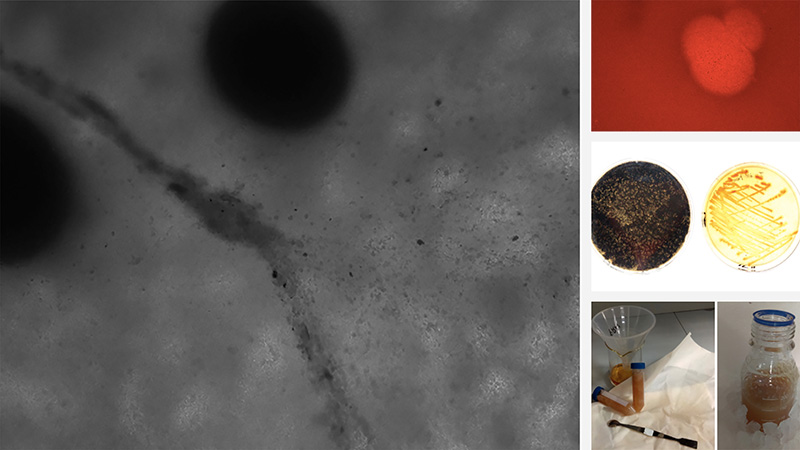 In the beginning, the goal was to 3D print the skeleton of the beehive with chitosan, and than wrap this basis with microbial skin and add a biofilm with bacteria on top. We did a lot of lab-experiments to work with different concentrations of chitosan, to come to the conclusion that, to make an acceptable quality 3D print with this material we still needs a lot more testing and customizing of a 3D printer. Thus we focused during the rest of the experiments on working with bacteria with the required qualities to make the concept of the Intelligent Beehive work. 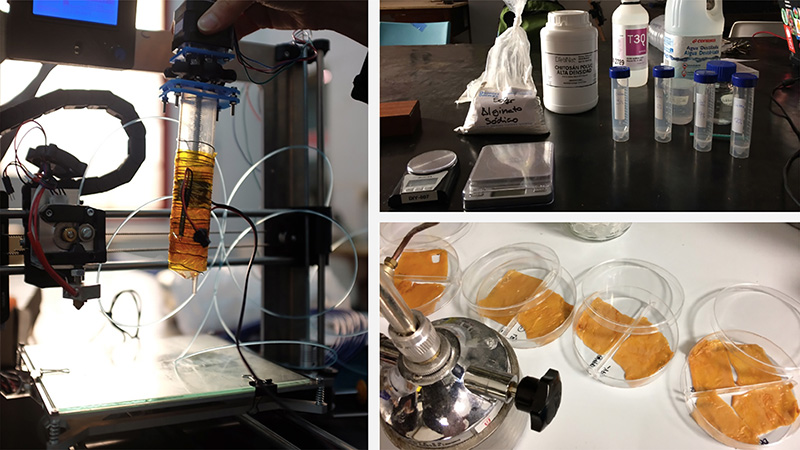 Customized 3D printed to print with agar.
All ingredients to make chitosan as a basic material for adding to microbial skin.
Pieces of microbial skin in petridishes, ready for chitosan experiments. 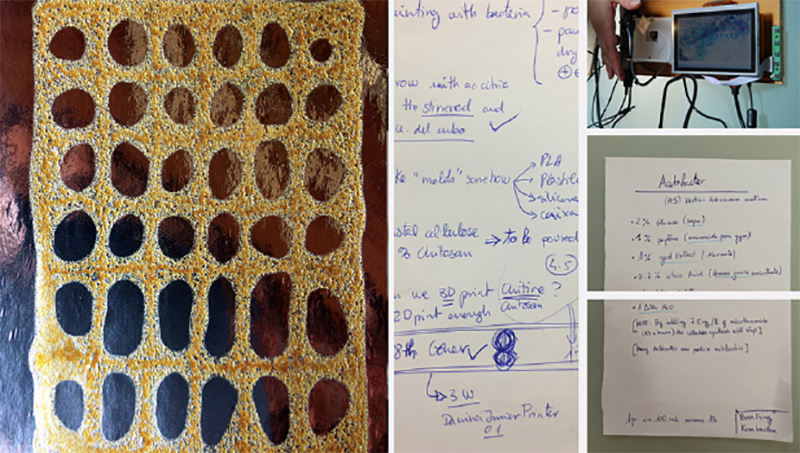 Another experiment on the list was to grow microbial skin immediately around an object. Therefore we constructed several test setups with magnetic stirrers, lego-constructions and stepper motors to assure a steady turnover of the object in the growth medium. After some failures our patience was awarded. In a room temperature of 25°C and after 2 weeks of ratations, a skin started to grow around our object: a 3D printed beehive model in PLA, filled with wooddust and drenched in growthmedium (cellulose starter pulp, green tea and sugar).
The result was hung to dry in a sterile jar that acts as an improvised bioreactor. There the freshly grown skin was inoculated with Lactobacillus plantarum bacteria and X-gal, which is used in molecular biology to test for the presence of an enzyme. The activity of this enzyme yields a greenish-blue color, which is clearly visible on the skin of our little beehive model. 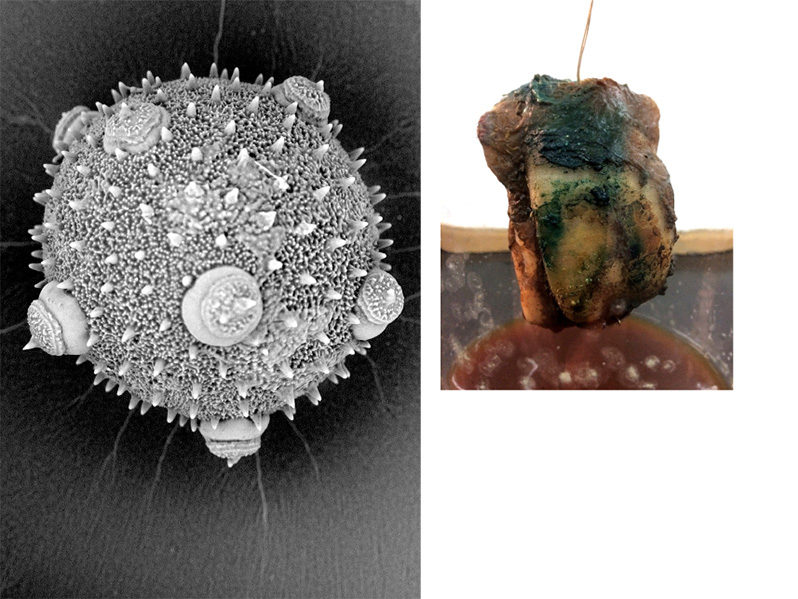 All the experiments are documented in the projects’ Lab Notebook. The book is accessible online and has the form of a wiki:
urbanbeelab.okno.be
Grow your own Beehive, Biology Zero, Sculpting with Skin, Learning from Nature, Speculative Stories, Material Experiments, Guerilla Beehive project page, … and many more online pages keep track of the development of the project. 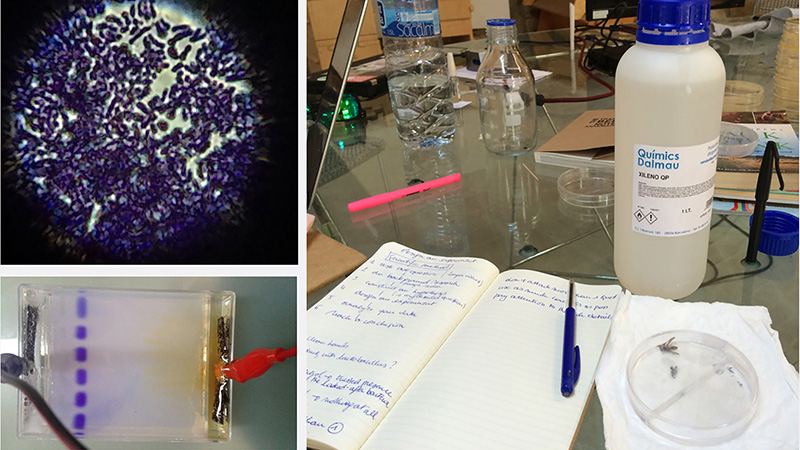 Until now, I worked on this project in close collaboration with the scientist Núria Conde Pueyo and the digital designers Anastasia Pistofidou and Joeri Bultheel.
Núria holds a PhD in biology and computer science and is the co-founder of the Bio Hacklab Barcelona.
Joeri Bultheel is an idependent electronic music composer and app developer, with a masters degree in computer science.
Anastasia Pistofidou is specialised in digital fabrication technologies and design, with a master degree from the Institute for Advanced Architecture of Catalonia (IAAC), where she currently works as founder and coordinator of the Fab Textiles group. 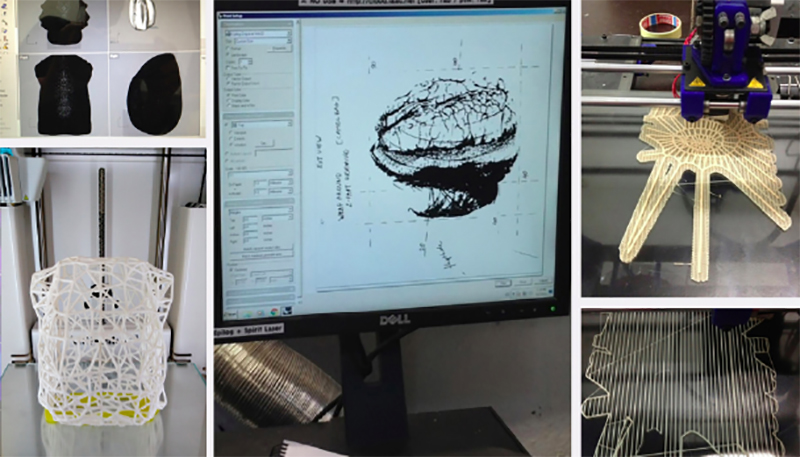 3D modelling of the hive.
Preparing the parameters for 3D print of the hive, starting from the design inspired by the pollen grain of the Fagraria vesca (screen) and analysing possible print setups;
3D print of the skeleton of the beehive.

The Intelligent Guerilla Beehive is a sensing device which mirrors the pullution of the environment. Through colonies of ‘color-changing’ bacteria –living on the skin of the hive- it sends out warnings. At the same time it is a device which monitors the bees’ wellbeing. It is a radically new beehive designed for urban environments.
The Intelligent Guerilla Beehive offers a concrete starting point for an exploration of possible futures through artistic research on material science and biotechnology. Navigating between a blueprint and a proof of concept, the Intelligent Guerilla Beehive can be seen as an artifact from the future, a fragment of a world to come. I use this tangible design to tell a compelling story; and through the installation, constructed with various elements of my experiments, I create an immersive experiential future. 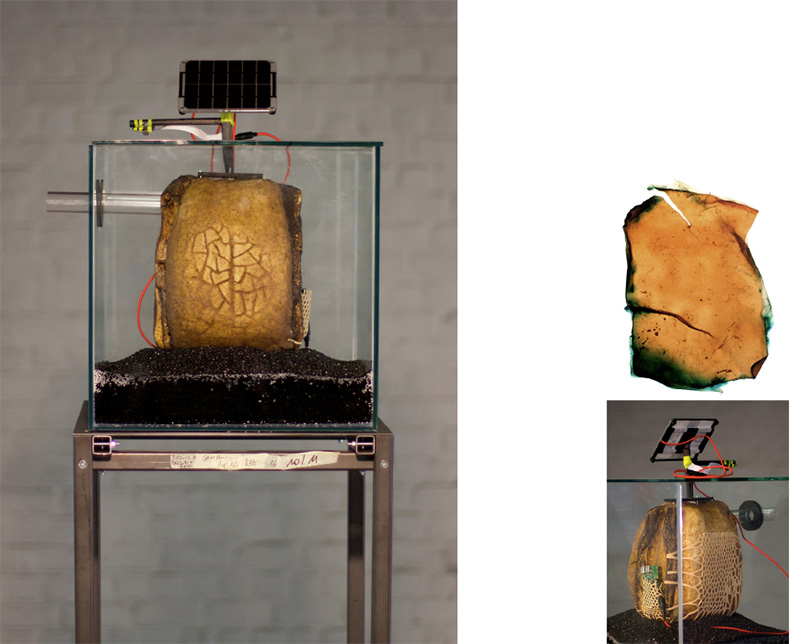 The Intelligent Guerilla Beehive, front and back.
Cellulose Skin with Lactobacillus bacteria.

We urgently need to make our lifestyles less destructive for the environment and develop new biotechnological applications that help to keep our world sustainable in the long run. This project sets steps on a roadmap to achieve these goals. It tackles a new challenging application domain where a collaboration between human and non-human actors is necessary to keep up the resilience of the system.
Driven and inspired by the intelligence, complexity and self-organisation of the Super Organism -the bee swarm- we develop new materials and biomimetic habitats together with ‘other organisms’ (bacteria, insects and plants).
The Sensorial Skin is such a smart fabric that integrates a mix of organic and electronic elements for sensing and actuating, for computation and for communication. 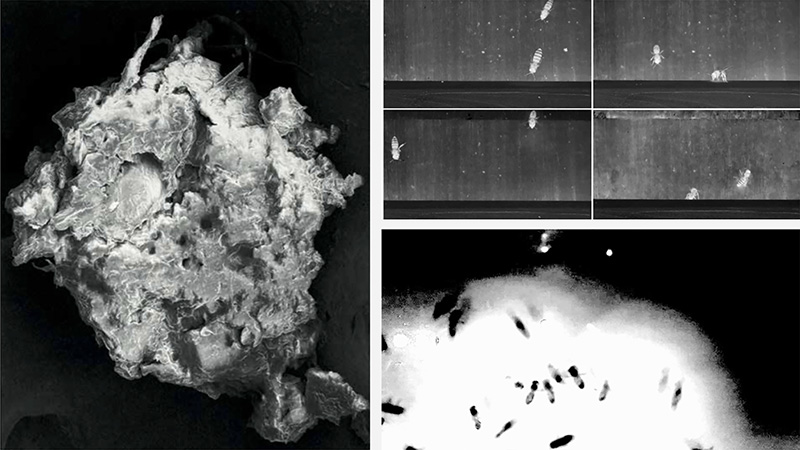 I have been building a bee laboratory to study the development of the colony through its own sounds. The buzz of a colony and its behaviour and conditions are quite related. It is possible to know if a hive is queenless or if an important amount of nectar has been collected simply by listening to it.
For this experiment we followed a systemic approach to raise understanding of the characteristics of the colony through relationships with its environment, through patterns discovered in the collected audio, video and sensor data, and through contextual observations. I studied the bees as a re-generating network of actors (autopoiesis), all of them contributing to the organisation and well functioning of the colony, the super organism.

Specific (open source) hardware and software was developed in order to continually monitor the sounds on different spots in the beehive.
I uploaded the annotated video and audio data for public viewing in the opensource videodatabase pandora. All corresponding sensor data were publicly available on opensensordata.net. The information archive was growing as more audiovisual observations and more sensordata were added over time. 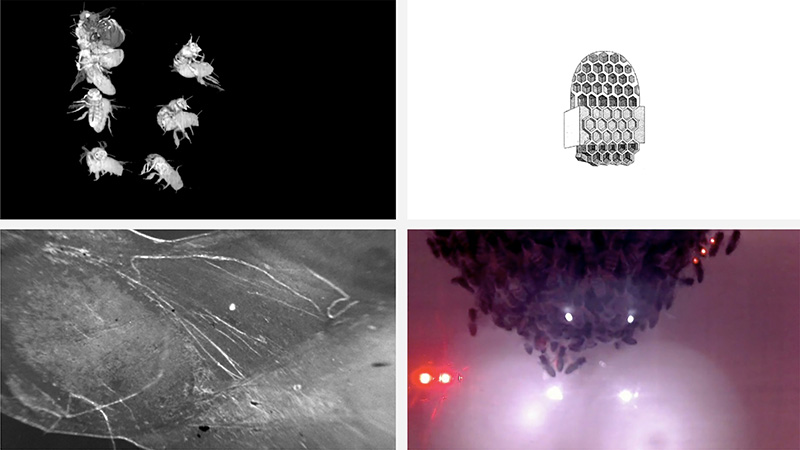 A massive amount of data were recorded in in the broodnest of an urban beehive installed on the roof top of the Brussels Urban Bee Laboratory and processed using sophisticated pattern recognition, AI technologies, and sonification and computer graphics software. The project included an experiment in using Deep Learning to interpret the activities in the hive based on sound and microclimate recording.
A video shows 365 days of activity inside a real observation beehive, played back at higher speed. The images were recorded with an infrared camera inside the hive and processed using pattern recognition, AI and computer graphics algorithms. These images give a stunning visual experience of a colony in action. 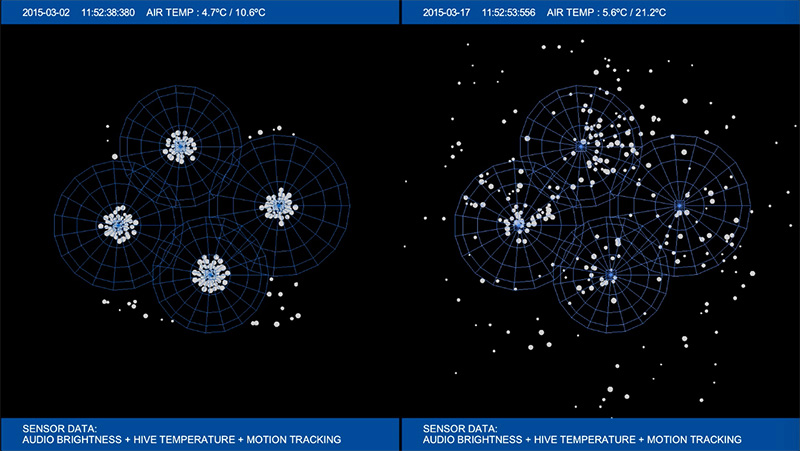 A second video shows a graphical rendering of AI analysis of colony behavior combining real audio data with measurements of microclimate inside the hive:
temperature, CO2 and humidity and using Deep Learning to detect patterns in the data.
The project uses a broad range of pattern recognition and AI techniques. An experiment was carried out to use Deep Learning techniques using massive data from sound and microclimate in order to get an interpretation of hive activity. The data were transformed into a multi-dimensional feature space, and presented to a Deep Learning network to extract categories capturing patterns of activity through unsupervised learning.
An original visualisation was developed which represents categories as attractors in a projected 3d space, with the size of the attractor reflecting the strength of the category.