Bees are a means for exploring how humans interact with and understand nature. As an urban ecologist, I study the link of the honeybees to the environment. The bees’ overlapping foraging areas create ecological corridors throughout the city. By hacking rooftops and transforming them into urban gardens, I am experimenting with new forms of sculpting the public space. It generates a form of site-specific art intended to provoke change. Ecological corridors in urban environments are a new medium of social sculpture, a Gesamtkunstwerk that relies on the creative participation of many.

How can we study the differences between a biological corridor and the rest of the city? The honeybee colonies forage in a radius of 3 kilometers around their beehive. They fly on their own airborne roads back and forth from their collecting jobs and bring a sense of rural to the urban environment.
To track the flightroutes of the bees and to study the specificities of the ecological corridor, several sensors are added to the open air laboratories to aggregate environmental data such as air temperature, air humidiy, solar radiation, rainfall and air pollution.
The measurements of climate, soil and vegetation are complemented with additional measurement of internal temperature and humidity in the beehives. Storing the data over a 12 months period provides very detailed observations and it allows us to discover and follow long-term trends in the complex relations between the colony and its environment.

I have set out several urban test fields in the Brussels’ Canal Zone. This area features diverse activities: from community gardening and urban agriculture to accidental nature, interspersed between industrial buildings, office zones and living areas. My test sites are connected by the flight routes and foraging activities of the bees. Ecological corridors are emerging from the connected foraging field areas. As such, the bees create a green corridor through he city. 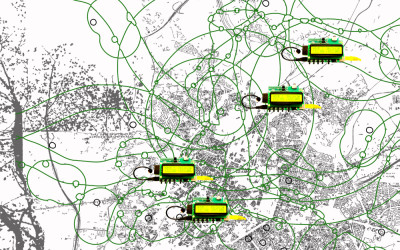 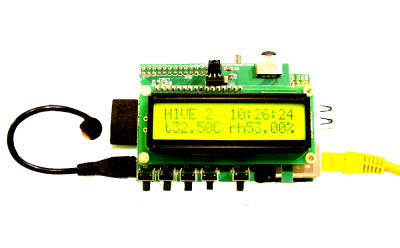 Foraging areas around test stations form an ecological corridor. The testfields are spread along the Brussels’ canal zone: Urban Farm, OKNO, Kaaitheater and Thurn & Taxis. Every test station registers the climatological data (air temperature and humidity, hours of solar radiation, rainfall and particle pollution) as well as the biological data related to the colony inside the beehive (temperature and humidity, Co2).
Wallpaper big format, Raspberry Pi’s with LED screens and realtime data transmission from the test stations. 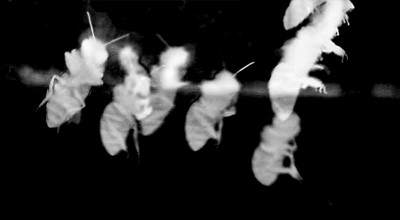 The Flightroutes#1 was presented
– as part of the Foraging Fields installation in the exhibition FIELDS, Riga – Latvia, from 15 may 2014 to august 4 2014.