It may be possible to observe the position of the bee nucleus using only a few sensors combined with a temperature conduction/convection/radiation model. However, before we can be sure what the appropriate density is of the sensors, we will use a set of sensor on a 3D grid. From this data we can extract the appropriate model/sensors for a simplified monitoring system, and we may observe other interesting phenomena.
For a fine integration of sensors, we can take inspiration from previous work on smart textiles.
On each frame, four sensors on each corner, then four sensors in a smaller square in the middle of the frame, and then one sensor at the very center of the frame. The sensors are thermistors, a small resistive element whose resistance varies with temperature, encapsulated in glass. Such sensors are more robust than more sophisticated ones, with a small circuit allowing the conversion of resistance in voltage information. We will let them naked on the frame, and let the bees cover them with propolis. We will just assume a given response time due to this thermally insulating layer. We will connect the sensors to the ground through cables structuring the frame, so that we can power them with only one wire – which already makes 12⇥9 = 108 wires for the whole broodbox.

The wires will be selected to be as thin as possible – only a single copper wire coated with (bee-compatible) polish. Each sensor will be connected to a analog multiplexer so that they can be measured one at the time. A Wheatstone bridge is used to convert resistance information in voltage information (see Fig. ??). This Wheatstone bridge will be installed out of the frame, and connected to a multiplexer allowing to read the 108 sensors using a single Arduino chip. The thermistor resistance range will be selected so that the wire resistance can be neglected.
Electro-magnetic fields generated by the grid should not be a problem, as only changes in current and tension generate them. If we monitor at very low frequency, we should not produce disturbing electro-magnetic fields for the bees. 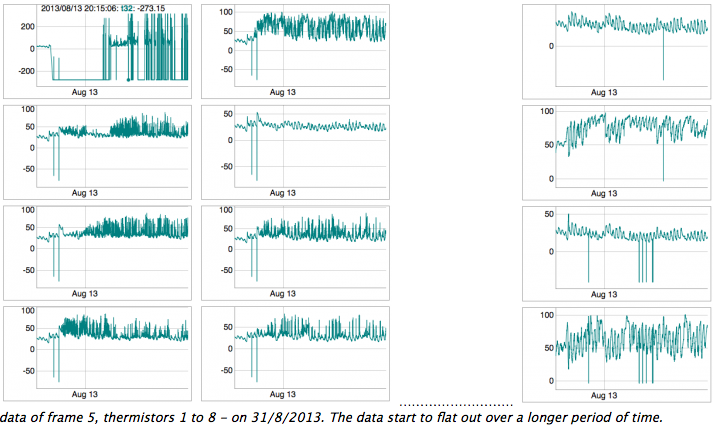