The story behind the concept
The project ‘Guerilla Beehives’can have an exemplary meaning for the audience if it comes to the public perception sustainability. It is a collaboration between the arts, design and science.
This is the end of the anthropocene. We imagine an ecosystem where all actors collaborate to keep up the resilience of the system. As artists, gardeners, makers and thinkers, we collaborate with animals, plants, insects and bacteria. END_OF_DOCUMENT_TOKEN_TO_BE_REPLACED

For many years now, I have been creating experimental set-ups using sustainable beehives that have been augmented with camera’s, microphones, sensors and sensory processing algorithms to analyse the state of the colony, the quality of pollen and the behavior of the bees. These “Intelligent Beehives” are progressively linked in a European- wide network and the data is being made available online.  END_OF_DOCUMENT_TOKEN_TO_BE_REPLACED 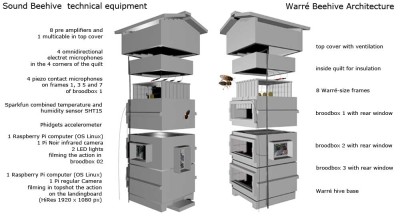 I decide to do another bee-sound-experiment. The fist one I did was in 2012 with the Transparent Beehive. Then, the focus was on exhibiting in realtime the sound of the colony. During talks and presentations I was making observations and linking them to the amplified sounds made by the bees.
This time I want to do it differently. I will record at regular intervals the hum of the colony and analyse it thoroughly afterwards. I also want to link the sounds with the environmental sensor data (temp, humidity, solar radiation) in the surroundings of the apiary, with the sensor data inside the beehive (temperature, humidity and vibration of the comb) as well with video images in- and outside the beehive.
For this setup, I will collaborate with Vincent Malstaf (sound engineer), Balthazar de Tonnac (computer scientist), Bob Motté (electronica engineer) and Bart de Boer (computer scientist Artificial Intelligence, complex systems, bio-acoustics).
The Raspberry technology offers us a not too expensive solution to build out a suitable lab-setup for this research. The data will be available on the opensensordata website. END_OF_DOCUMENT_TOKEN_TO_BE_REPLACED 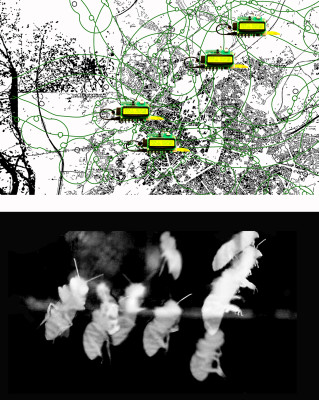 Further development: a bio degradable organic hive design and biosensors powered by sustainable energy to develop a beehive that is at the one hand a sensor of the environment (pollution, nectar, pollen analyses) and at the other hand a non-intrusive bee monitoring system (in times of Colony Collapse Disorder). END_OF_DOCUMENT_TOKEN_TO_BE_REPLACED

Growing intelligent beehives is a long term project, from mycelium and recycled waste straight into the final guerilla beehive shape. The purpose is to populate Brussels city with a network of intelligent guerilla beehives. These are beehives that offer shelter to a bee colony ‘in the wild’ – bee populations that are not domesticated but that are monitored from a distance in a non-intrusive way while they are collecting information about the urban environment.
The system is set up as a fully organic, cradle to cradle, circle. END_OF_DOCUMENT_TOKEN_TO_BE_REPLACED

The last weeks I colletected yet on several days pollen at the entrance of the beehives. I also have a pollen collected from spring this year.
On 21/22/23-8 I can work at the Chemical Engineering Lab of the VUB on the SEM (Scanning Electron Microscope). The SEM offers the possibility to make perfect 3D images at +20.000 enlargment scale. Ideal for photographing pollen and bee-parts as proboscis, receptors, e.g.
The lab is specialized in surface metals research. I work with Gizem Süngü, a future PhD student. END_OF_DOCUMENT_TOKEN_TO_BE_REPLACED

Palynology is the “study of dust” . A classic palynologist analyses particulate samples collected from the air, water, or from deposits including sediments of any age. The condition and identification of those particles, organic and inorganic, give the palynologist clues to the life, the environment, and energetic conditions that produced them. wikipedia.
At Sony CSL in Tokyo I meet Masatoshi Funabashi. Masa is an expert in complex systems relations in ecologies. We talk about flowers and insects, and we decide to work with honeybees (among other insects) to collect usefull information on the ecosystem. The bees will work as interface/sensor for gathering environmental information via the pollen they collect. In my wiki, I start with a pollen database. 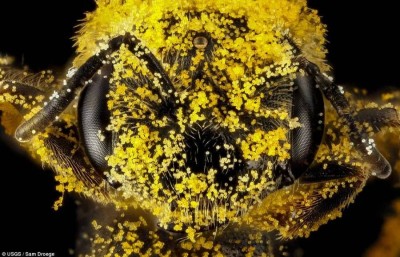 June 2013 Masa and me decided to work on a joined research project that investigates the link between insects, pollen and ecosystems. We will set up a database and compare pollen -straight from the plant- with pollen brought back by honeybees to the hive. With pattern recognition software we hope to collect information about the ecosystems foraged by the honeybees.
We will work with the software ELFE to discover emergent patterns in a multitude of pollen pictures.
In philosophy, systems theory, science, and art, emergence is the way complex systems and patterns arise out of a multiplicity of relatively simple interactions. Emergence is central to the theories of integrative levels and of complex systems.

I am completely fascinated by the aesthetical forms of the pollen grains. The more I research, the more I want to work with sophisticated machines to study the material. With the help of Professor Luc Steels I can work at the VUB in the chemical engineering Lab, where they have several SEM – scanning electron microscopes. Working on these machines a complete new world is opening up.