The last weeks I colletected yet on several days pollen at the entrance of the beehives. I also have a pollen collected from spring this year.
On 21/22/23-8 I can work at the Chemical Engineering Lab of the VUB on the SEM (Scanning Electron Microscope). The SEM offers the possibility to make perfect 3D images at +20.000 enlargment scale. Ideal for photographing pollen and bee-parts as proboscis, receptors, e.g.
The lab is specialized in surface metals research. I work with Gizem Süngü, a future PhD student.

We start with the spring pollen: olive green and light yellow. The SEM microscope operates in steps. We have to zoom in more and more, one (big) step at a time. The electrons are flying around and they are scanning the pollen. The bundles of electrons are manipulated by electrical fields; they create a similar effect as lenses on light. Finally the image is processed on a screen.
There are different setting possible. TIFF and Jpeg, different resolutions. Max. is 2048. We can play with contrast and brightness. When we go in higher magnifications, there is damage caused by the electrons. They are attacking our subject!

The pollen give a rather grey contrast. Their skin is hard and soft at the time. We are working with living material (not with dead metals!) and sometimes the subject disappears while we try to photograph it. Shot away by the electrons!
Alex Lutz tells us that we need to put a slight gold coating to prevent damage. He takes us to the 5th floor where the platinum coating machine is situated. A short introduction follows. The result afterwards is indeed much better. The resolution of the subject increases. The soft pollen and bee-parts become also better resistant to the shooting electrons. 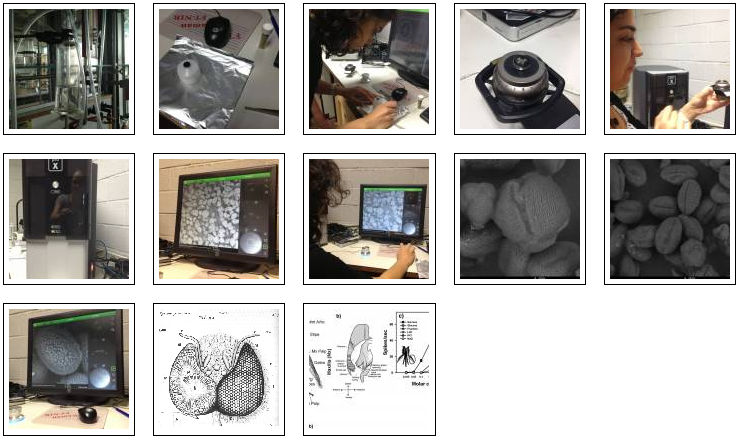 We try out different pollen combinations. Spring – I think the majority comes from the salix family – range of light yellows (nrs. 197, 198, 200 – IBRA: a color guide to pollen loads of the honey bee). We pinpoint also a bright yellow pollen from spring – my guess is the Taraxacum officinale. And then a series of possibilities for the olive green pollen: Viburnum tinus (IBRA 66), Rubus (IBRA 249), Prunus avium (IBRA 236), the yellowish green of the Malus domesticus (IBRA 114). The olive of the Prunus spinoza (IBRA 244), the fresh green of the Sambucus nigra (IBRA 64), the darker green of the Vicia faba (IBRA 73) and the olive green pollen of the Quercus robur (IBRA 76). We need to do a lot of determination, but all these trees, flowers, herbs and vegetables are in and around the rooftop garden … A fascinating world is opening up. We try to organize as good as we can, being newbees in this SEM-world.

Than comes the bee-parts. Great! The bee eye: insects discover flowers from far way, either by smell, by vision, or by a combination of both senses. Comes the play of the flower and the bee, and the attractions by special colors, special shapes, special scents. A very detailed account on this is given in the book Insects and Flowers: the Biology of a Partnership (by Friedrich Barth).

Bees also see colors, a discovery by nobel laureate Karl von Frisch. Important to know is that the color spectrum of a honeybee is shifted compaired to the human visual spectrum. Bees distinguish shorter wavelengths and the result is that they see ultraviolet (at the left/short side of the spectrum) but they can not percieve red (at the right or long wavelength side of the spectrum). The result of this difference in view with humans is that a honey bee sees a variation of colors in the flower world, but they don’t see it in the same colors as we -humans- see it.

A bee eye has 6900 hexagon pixel lenses, with hairs to protect them. The hexagon basis of the lenses are identical to the form of a honey comb. The antennae -the bees’ instrument to scan the environment on all sensitory levels- are full of receptors – thousands of them! With these receptors, the bees sense an smell. There are 40.000 sensors on a bee antenna. These sensors, with which the bee detects the odors of the flowers, are located on the exoskeleton, as this is the boundary between the bee and its environment.

Most of the sensors are very small hairs, see pix. But 6000 of them are ‘pore plates’- the round pores on the 6th picture. These are the sensilla placodea: oval, slightly concave plates with a diameter of 12 micron. It are the olfactory or smell sensilla. Each pore plate is associated with a number of sense cells, which are directly under the plate and are connected with it. The pore plate has pores, they are arranged in a ring round the edge of the plate. The scent diffuses through the membranes of these sense-cells, where it provokes a nerve signal. Thus all the changes in the physical and chemical conditions in the surroundings are translated into the language of the nervous system.

The bee can detect a spatial odor pattern (3D odor shape of the flower). It can distinguish different concentrations applied simultaneously to the 2 antennae. After landing on the flower, the antennae smell various odors on the way to the nectar. (Insects and Flowers – the Biology of a Partnership). Without the platinum coating these sensor-hairs were catapulted away and flattened by the electrons, but after coating we can photograph them in detail. Also the wing of the bee seems fascinating, with the hooks, the veins, …

Not to speak about the proboscis. The proboscis is the combination of all mouthparts of a honey bee. It is an long and complicated instrument that exists out of 5 parts. When it is not used by the bee (in flight, e.g.) it folds back like a clasp knife. There is a pair of mandibles (the upper jaws), these chewing tools are used to eat pollen, build the comb and clean the beehive, and to fight uninvited guests at the door of the hive.
Than there are the lower jaws, the maxillae. They consist -amongst other parts- of the galea, the long appendices flanking the tongue or glossa. This is a long, straw-like instrument, covered with hairs with a spoonshape end to suck the nectar.
Besides being a feeding instrument, the bee-tongue serves also for licking the queens’ pheromones which regulate the life in the hive. So it is also a kind of communication instrument. The length of a sucking proboscis of a honey bee is 6,5 mm. This is important for reaching the nectar position within a flower.
The Proboscis is truly a completely unknown world opening up. Scary and fascinating – makes me think of the jaws of a whale … at the end of the proboscis (the 3fold bee tongue) we can see the honey spoons, the bee-instrument for collecting the nectar out of the flowers. The minimum magnification of the SEM is x270. This makes that we are always much zoomed in, making an overview is difficult.

22/8/2013: working with prepared pollen samples
At the end of day 1 I came to following conclusion: it will be very difficult to determinate the pollen collected by the bees. I need another method for catalogueing the pollen. I will do a double check.

This morning, 22/8, I go out in the garden to collect pollen myself, straight from the flower. This is the real ALOTOF. A Laboratory On The Open Fields. I collect Calendula officinalis, Fragaria, Borago officinalis, Fagopyrum esculentum, Mentha spicata, Helianthum annuus, Cucurbita pepo, Solidago canadiensis, … (many more – fill out).
At the VUB Chemical lab I make samples of all this – dip the sticky tape in their pollen and put them on the little black dot to be scanned by the electrons. Making a good sample is the basis of a good image. Tomorrow is another day.

We make some pictures of samples taken on august 20 2013. In the results, we see that there is indeed a big difference between fresh pollen and dried pollen (the ones from april 2013). The fresh pollen move: they implode, as they are deshydratating. This happens via the pollen apertures, the slits we see in polair and equatorial view. The pollen can swell again as well if necessary, for example when they arrive via pollination on the pistil of the (female) flower and they grow via the pollenbuis and the style till they reach the ovary where fertilisation takes place. A seed is born.

Dehydrating fresh pollen – water is leaking out of the pores and the apertures, after a few days. 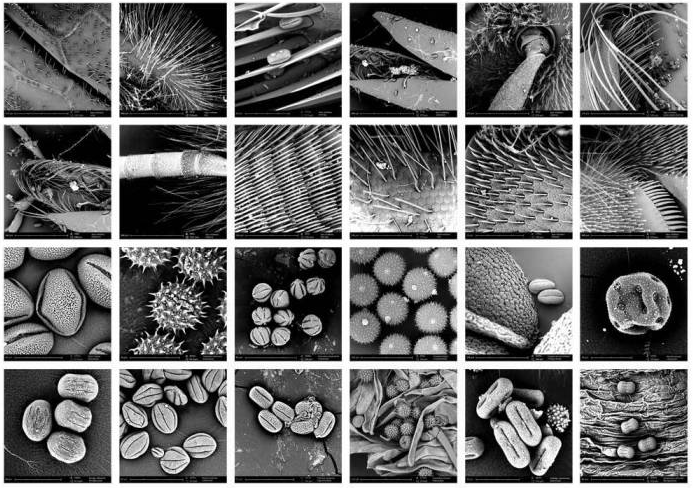 Pollen identification and classification are important not only for palynologists, but also for systematists and ecologists. Because palynological methods for the identification of pollen in surface soil until now could resolve at best to the generic level, we have developed a molecular approach to species-level identification of Chenopodiaceae pollen in surface soils. Surface soil samples were collected in the central area of Junggar Desert Basin, Xinjiang, China.
Fresh leaves of 19 Chenopodiaceae species were sampled for DNA sequencing, establishing a database of internal transcribed spacer (ITS) regions of nuclear ribosomal DNA for Chenopodiaceae. Individual chenopod pollen grains in a soil sample were separated from the soil and the ITS1 region of each pollen grain was amplified using nested PCR and sequenced. By comparing the amplified ITS1 sequences to those in the Chenopodiaceous database, we identified the pollen in the soil samples to the level of species. The new method provides a technical reference for species identification of soil surface pollen for other families. This work is necessary for further efforts to interpret the relationship of surface soil pollen to vegetation characteristics.