In a few days the OpenSource Beehives workshop will be hold in Valldaura. Meanwhile, Jonathan Minchin, John Rees and Ferran Masip, three students of the FabLab Academy, have been working for weeks on the actual physical beehives and the sensors that will be inside them. It’s been a process of research to find and create the best prototype, modeling, printing and milling the parts for the final assembly; while circuits where printed, soldered, and lots of programming and testing was happening. There will be – at least – three final beehives, one to be placed in Valldaura, one to be placed on the rooftop of Iaac, and another to be shipped to Belgium, at OKNO.

Annemie and Tomás agreed on following research:
As an April goal we should have the two beehives in Valldaura & Brussels, with the new designs. Then from April to June we should end up with the advanced prototypes, either 3d printed or using organic materials. I would like to make some tests for ‘organic beehives’, starting from plant seeds.
Seeds fascinate me, and there are so many different strange but wonderful designs and forms that we can take as input for a beehive design.
– is it possible to scan with a 3D scanner a small seed from ± 10mm?
– is it than possible to ‘blow up’ the scan in the computer and magnify and modify the design?
– and as a third step laserprint the ‘seed-design’ in a big model (± 500mm x 500 mm or more)?
– and 3D print the design with organic material, as beeswax for example (or propolis)?

We can 3d print it in normal materials. To print with organic materials as wax or propolis is one of the tasks on the list: research the development of a print head for the kuka robot that might work with the beeswax -I think is technically possible. 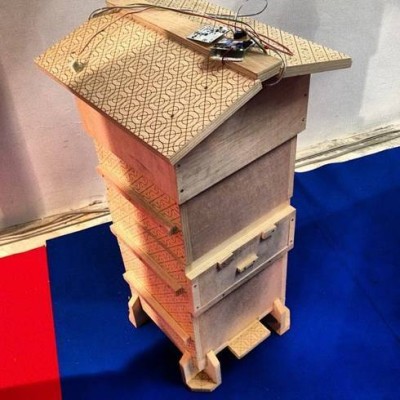 OpenStructures / OpenSource Warré Hive at the Makers’ Faire in Rome, october 2013
Plans of the OS WarréHive in the Open Structures database