The Transparent Beehive Notebook gives an overview of the Transparent Beehive Project. It describes in words and images the intense process of Bee Monitoring and the close collaboration with numerous colleague artists, scientists, engineers and beekeepers. The relation bees and flowers is an evident one and is never far away in this notebook. In an artistic way and starting from hands on experiences as a beekeeper, I give an account of the building of monitoring systems and their implementation in the beehives at the open field labs. Working with the collected open source data is explained, and most important: the disclosure to a public in a set of transdisciplinary art forms: photographs, films, sculptures and the Bee Archive.
A bee colony is a sophisticated instrument, the super organism demonstrates a feat of collaboration through communication. Working with honeybees is absolutely fascinating and the job they do for the sake of mankind is certainly underevaluated. It is a shame that they go through such difficult times. I will continue to support them where I can. 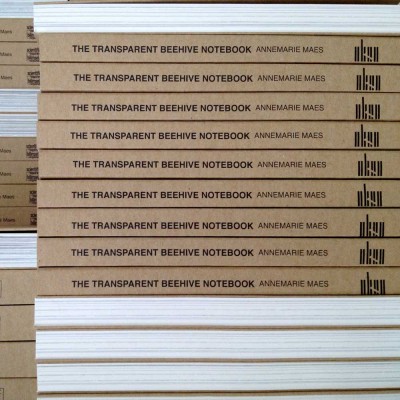 This notebook gives background info on the bee monitoring project. Scientific experiments, artistic drawings, articles, texts, artistic impressions , … etc. By clicking on the image, you can download the Transparent Beehive Notebook, published in the context of the Scientific Inquiries exhibition in Istanbul, november 2013. If you are intrested in a hard copy of the book, you can contact annemarie at at at annemariemaes dot net.

The Transparent Beehive Notebook was presented
– as part of the Foraging Fields installation in the exhibition FIELDS, Riga – Latvia, from 15 may 2014 to august 4 2014.
– as part of the Scientific Inquiries exhibition in Istanbul at Koç University, from 7 november to 7 december 2013.

This work is licensed under a Creative Commons Attribution-NonCommercial-NoDerivatives 4.0 International License.

The Bee Monitoring project probes deeply within a network of ICT-enhanced beehives. Between may 2011 and april 2012, a complete cycle, from the awakening till the hibernation of the bee population, was recorded in a continuous stream of pictures, sound and sensor data. All this information is readily available online for beekeepers, scientists and other artists, offering an opportunity to study the bees as bio-indicators.

Two webcams were placed into the beehive, and the bee colony’s action were monitored and registered from the very moment that the swarm arrived into the beehive. We were filming the actions in real time, during 365 days, spring, summer, fall and winter. All images have a timestamp.
The webcams registered at 15 fps and the images were stored on the server, but also streamed in realtime. The final product is a video were the 365 days are compressed into 12 hours.
The same time, sensor data were recorded inside and outside of the beehive. Inside the values of temperature, humidity and Co2 were registered, outside the temperature and humidity values were noted.

The Bee Laboratory displays the artistic research on one year of monitoring -/outside- of the hive of a city bee colony. Beekeepers, scientists and artists were collaborating to collect data on the colonies’ behaviour to its urban surroundings.
The monitoring project is located in the open air laboratoria of our urban rooftop gardens. It offers the opportunity to study the bee colonies as bio-indicators. In this documentary installation we give a research survey of the timeslice may 211 – april 2012 in data, sound and images.

The ‘Webcam 365 days’ video was presented
– as part of the Foraging Fields installation in the exhibition FIELDS, Riga – Latvia, from 15 may 2014 to august 4 2014 – the Peephole (dancing bees).
– as part of the Scientific Inquiries exhibition in Istanbul at Koç University, from 7 november to 7 december 2013.

The videos bees-webcam 24hours and bees-trail are generally presented in a 3 channel video installation together with the bees-webcam 365days video. All 3 videos give an artistic survey of working with an observation beehive. The beehive is enhanced with different sensors and with 2 webcams inside.
The video bee-trail renders the timelapse in the beehive by showing the trail of honeybees over a combframe. The moment that the hive is opened and that the sunlight gets in, we see an explosion of activity as all bees move together towards the light source.
In the video bees-webcam 24hours a timeslice of 24 hours -starting at 00:00 midnight and ending at 23:59 midnight the next day- is compressed into a video of 5 hours. We see the bees running throug the transparent tube which is connecting the hive to the outside world. The bee-activity increases with the sunlight and is at its pinnacle at noon. After 3pm the activity slowly decreases to stop completely with the falling of the night.

The ‘webcam 24 hours’ and ‘The Trail’ videos were presented
– as part of the Scientific Inquiries exhibition in Istanbul at Koç University, from 7 november to 7 december 2013.
– as part of the Time Inventors’ Kabinet [TIK] festival at OKNO in Brussels, april 2012 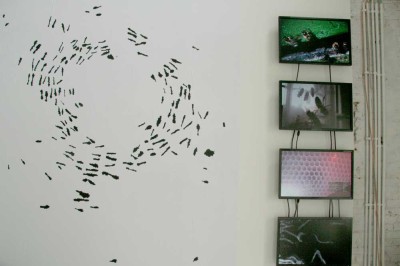 3 channel video installation representing the monitoring of the Transparent Beehive from beginning of may 2012 to the end of april 2013. The Transparent Beehive was set up in the Drying Room, the laboratory connecting to the okno rooftop garden in the center of Brussels. The fragments in the videos were filmed over the time of the season on regular intervals. Click the images to play the 3 videos together.

The videos ‘Bee Monitoring, 3 videos’ were presented
– as part of the Scientific Inquiries exhibition in Istanbul at Koç University, from 7 november to 7 december 2013.